hypanis.ru Telsacon 5: Journey to the Center of the Earth « Kevin F. Kelleher

Telsacon 5: Journey to the Center of the Earth 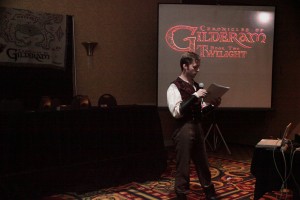 Over the weekend, myself and 1,500 other steampunk fanatics were treated to a once-in-a-lifetime journey. After taking all manner of airships to the rather unlikely meeting place of Madison, Wisconsin, we found ourselves happily arrived in London, England, towards the end of the 19th Century. 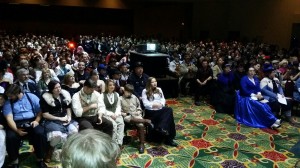 Our host, Lord Bobbins, greeted us all at opening ceremonies with a jovial salutation – but things would take a sudden, dire turn as he revealed the purpose of our gathering. The world was in peril: we stood on the verge of utter resource depletion. But Bobbins had a plan: there might be a solution to our dilemma… but it was buried beneath the earth’s crust, in the center of the world.

In short order he had rallied us together: we would sail with him on his airship, the Freya (previously known as the Marriott Hotel), straight into the heart of the earth, and we would either return again laden with incredible new power – or we would die trying.

To spoil it for you, we didn’t die. (Well, most of us didn’t, anyway.) Furthermore, we were all quite surprised to find out that the center of the earth is, in fact, teeming with unlikely inhabitants, like this velociraptor: 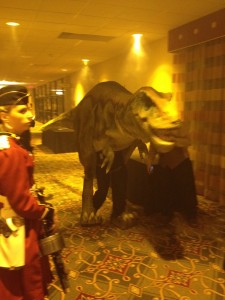 Lord Bobbin’s personnel, on the left with the huge gun, guides us on our first exploration of the Center of the Earth.

Along the way, we merrily indulged ourselves with diversion (for what else can dignified gentlemen and gentlewomen [and gentle-non-binary-peoples] do in such a situation?). For my part, the long-anticipated cinematic trailer to my fantasy series, The Chronicles of Gilderam, was given its world-premiere showing to a select audience of steampunk aficionados.

My presentation: The Cinematic Book Trailer. I’m dressed as Owein Maeriod, the central protagonist from my book.

I’m very sorry to report that it won’t be seen again until Ravencon this coming April, in Richmond, Virginia. It will one day soon be made public, but not quite yet….

We also, of course, made time for tea. 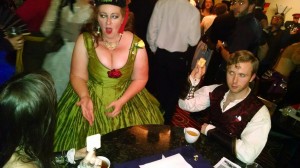 Tea Dueling. I suggest you try it!

Aside from the quirky storyline of the event, and the incredible immersion effect which Bobbin’s crew created, AND the slew of amazing vendors to be found there, the most amazing part of Teslacon was the people in attendance.

A farewell dinner with just a few of my new friends. Very thankful for the internet to keep us connected until next we meet.

Myself with the minds behind Harren Press, Chris Powell and Jesse Duckworth.

Steampunk is an unusually inclusive arm of Fandom. The real impetus for steampunkers centers around imaginative creation, which can include anything at all.

In fact the weirder – the better! 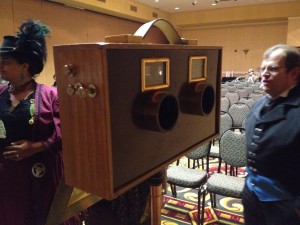 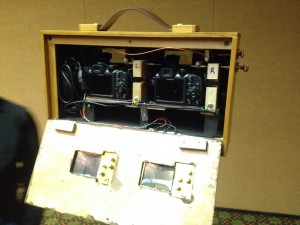 …with a steampunk twist! 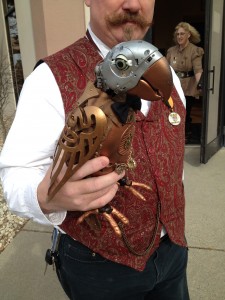 Or this ingenious animatronic parrot. It moves and speaks so realistically, that this man should be termed a wizard for building it.

This means that everyone and anyone has a home in the world of steampunk. And, as I discovered with great joy, when you put a bunch of those kinds of people in one place for a weekend, what you get is a magic and a human warmth unlike anything I’ve ever experienced.

See all the photos here.