Prediction for “Star Wars: The Rise of Skywalker”

I intend with this post to make predictions about the plot of Star Wars 9: The Rise of Skywalker. If I happen to get anything right, your experience viewing the film might be altered. Even if I’m not, the ideas I put forth below may nonetheless alter your viewing experience, so if you are not really super into fan theories and speculation, I would encourage you to read no further.

(At least not until later.)

With the initial reveal of the film’s title, The Rise of Skywalker, my first thoughts were to the obvious turning of Kylo Ren from the Dark Side to the Light, him being the only known genetic relative to the other protagonists of the saga: Anakin Skywalker/Darth Vader, Luke Skywalker, and Leia Organa.

This would fulfill certain aspects of the plot as they have so far been presented, but it is also not terribly clever. It feels like a bit of a red herring, meant to distract us from what will really happen.

Recently, I stumbled upon a slightly more intriguing idea…. 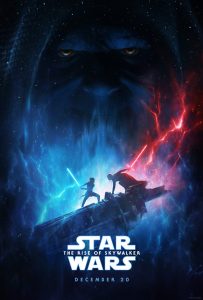 Because in the promotional material released, we find the haunting presence of Emperor Palpatine – first super-villain of the whole franchise – promised to make a terrifying return. It will be hard to find an enemy of greater stature within the confines a single, final film, and so we can rest assured that he will be our Big Bad Boss at the end.

But that opens up the possibility of shifting the crucial moment I had previously believed was lying in wait with Kylo to, perhaps, him.

Reinforced by the now very-well-demonstrated talent of writer and director, J. J. Abrams, not to create anything new with his monster gigs, but rather to simply rehash what had been good ideas before, it would follow that a similar formula to Return of the Jedi might have served as his roadmap for The Rise of Skywalker, in the same way that A New Hope had been copy/pasted into the body of The Force Awakens.

If so, that would give us a heightened moment at the film’s climax where, just as Darth Vader experienced a major character shift and managed to redeem himself, the pieces would now be in place for Emperor Palpatine to do likewise: by renouncing his evil ways, restoring balance to the Force, saving the galaxy, or whatever.

But how to get there?

All the Jedi are shooting blanks.

There are two Sides of the Force, and it had been an old Jedi oversimplification (lie) to believe that one was simply “good” and the other “evil,” a subtle distinction which Luke tried to point out to Rey in The Last Jedi. The Light and Dark are two sides of the same coin; both evil and both good, in different ways.

I contend that one quality, or perhaps side-effect, of using the Light Side of the Force is that it causes impotence.

Celibacy seems an odd stipulation for being a Jedi, doesn’t it? You’d think Jedi Masters would make excellent parents. And not yet has this quirky, Jedi-specific trait ever really been satisfactorily explained. Abrams has promised that Episode 9 will deliver a “satisfying” ending. I’m sure he won’t mention midi-chlorians again, but this issue might come up.

Because meanwhile you have the Sith, who actually specialize in Life Magic – making it last unnaturally longer, saving it from the brink of loss, and revoking it from whomever they choose with frightening ease. They are the masters of creation: of life and, necessarily, of death.

Which explains why the Sith tend to seek galactic domination: being Supreme Emperor of the Universe would make you into the patron (father) of all beings within it. They want to have as many kids as possible – even if they have to forcibly adopt, at blasterpoint, every last living being. In short…

…the Sith just want to be everyone’s daddy!

Which is, ironically, not as starkly evil a motivation as theirs had originally been presented. It becomes a matter of perspective. The Jedi, on the other hand, strive to be that aloof old uncle who lives alone as a hermit out in the desert, and who creepily watches you growing up from a distance….

While the Sith passionately pursue control over life in every way, the Jedi shrink away from it. In fact, Jedi seek to stoically embody the exact opposite of “being alive” – as is tellingly evidenced by a Jedi’s final form: a bodiless and transient ghostly apparition.

The celibacy of the Jedi also happens to dovetail neatly with another detail: that Anakin’s true switch to the Dark Side was not, in fact, the result of any darkening of his heart, or corruption of his conscious, but was rather the manifestation of having fathered children with Padmé, since dabbling in the creation (or destruction) of life is the purview of the Sith alone.

Which brings us to the Big Reveal at the end. All this lead-up and background coloration is fun, but the real twist will come when it is made known that Emperor Palpatine was the one to impregnate Shmi Skywalker – Anakin’s mother – and is therefore Darth Vader’s father, Luke Skywalker’s grandfather, and Kylo Ren’s great-grandfather.

First thing to notice here is that their apparent relative ages seem to line up nicely. As do their species.

This sets up the motivation for Palpatine to somehow redeem himself for an extremely long lifetime filled pretty full with galactic warfare and planetary destruction, when we learn that he is the true progenitor of the entire Skywalker lineage, and it was he all along who had been prophesied to restore balance to the Force.

And what a big balance that will be to restore!

The Jedi were becoming corrupted by their ever-growing power and influence throughout the galaxy, and Palpatine’s manufactured war was actually a necessary check on their power. Order 66? A lamentable, but unavoidable, decision – the only way to ensure that future events would occur… (ahem) “according to my design…” and guarantee the safety and security of the universe forevermore, looking at the bigger picture.

There’s a potential argument to be made here for Palpatine’s goodness. In a twisted, extremely-tough-love sort of way, he might be made out to be savior of the universe.

With this deeply-buried family secret finally made known, Palpatine can undergo a revolutionary change of heart, poetically mimicking the one of his son, Darth Vader, that nearly killed him three movies ago, and J. J. Abrams can have his neatly bow-tied ending to nine films worth of twists and turns and prophecy and exploding Death Stars, and everyone can leave the theatre feeling awed, surprised, and satisfied.

Well. That is, unless you’ve read this.