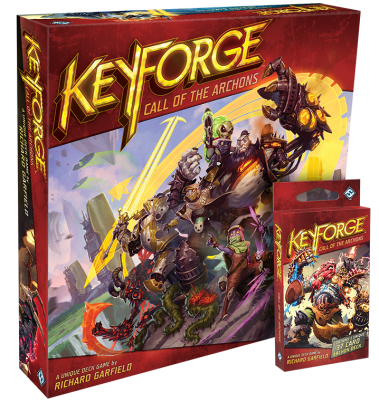 Keep your eyes on game store shelves at the end of 2018, because Keyforge – Richard Garfield’s latest work – is due for release, and it looks awesome.

I’ve long maintained that Magic: the Gathering, Richard Garfield’s first mega-hit, is the greatest game ever invented, and I have yet to encounter a product of his design that wasn’t at least great, if not quite as perfect as Magic. And a big part of why Keyforge looks so fun is because it looks a lot like Magic, but with a little Vampire (another Garfield game) thrown in. 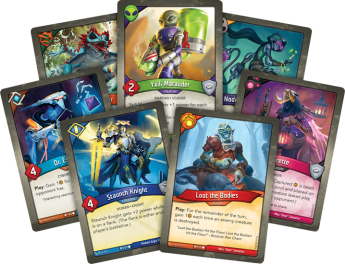 he main gimmick is that there is no deckbuilding – a striking departure from an entire genre of gaming (i.e. the Collectible Trading Card Game) which Garfield himself could rightfully be called the father of.

Instead, decks come as purchased, ready to play and not to be altered, and somehow Dr. Garfield (PhD-in-Recombinatorial-Mathematics-Smarty-Pants-Show-Off-Brainy-McBrainerson) has found a way to ensure a variety of over 104 quadrillion different decks, so each is unique.

Apparently a “secret… sophisticated set of rules and processes” is behind it. Curious…. Very curious, indeed.

In the world of Keyforge, you’ve got 7 houses (ahem – Game of Thrones) instead of the 5 colors of Magic. And in place of Magic’s mana-based economy, each deck in Keyforge is always made of 3 houses: at the start of each turn you must pick 1 of them, then you can play all the cards you want to of that house that turn (at the low-low price of not being able to play cards from other houses). Pretty elegant, Garfield, but what else ya got?

Creatures, enchantments (upgrades), artifacts, and spells (actions) exist in both Magic and Keyforge (Keyforge terms in parenthesis), and appear to operate in pretty much the exact same way. Creatures enter summoning sick (exhausted), and auras (upgrades) are destroyed when the creature they’re enchanting goes away. 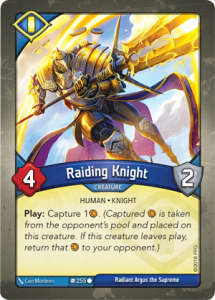 A neat twist here, though, is that your creatures form a line of battle, shoulder-to-shoulder, and their position in that line is relevant. When you play a new creature, it must enter on either flank, left or right.

During combat, and unlike Magic but a bit like Vampire, creatures fight other specific enemy creatures, and the genius power/toughness scheme of Magic is combined into a single power number, with the option of an additional “armor” number, which prevents incoming damage.

This subtle change is important because of the following improvement to one of Magic’s fundamental (and rather unintuitive) rules: damage does not magically (pun intended) vanish at the end of a turn, but rather it builds up, marked on the creatures with counters, and remains there until further notice. If a creature’s damage comes to equal its power, the creature dies.

Also interestingly, Keyforge’s turn order places “untap” and “draw” as the last two things you do:

1 – Cash in victory points (not at all what they’re called, but really what they are. In the story, you’re “forging keys to unlock the Architect’s secret Vault on the mysterious planet, Crucible,” but we all know what they really mean. It’s victory points.)

2 – Choose which house to use that turn

5 – (much like Vampire) Discard any number of cards in your hand of your chosen house, then draw back up to maximum hand size.

A lot of the fun of Magic is in the deckbuilding, and some of the best, beautiful bits of Vampire are hidden beneath a few unfortunate layers of needless complexity, so I am quite eager to see what Garfield has done with Keyforge. I see similarities to both in it, and I take that as a good omen.

With any luck he has forged together (pun intended) an amalgamation of good ideas from over the years into something new and – dare I wish it?! – even better.