“The Talhoffer Society” by Michael Edelson is a well-crafted thriller that promises to grab you by the throat and hurl you across its pages. 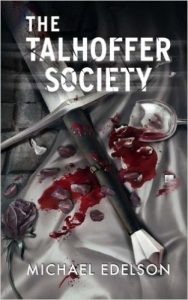 The central premise is this: all around the world, people are studying the ancient and, for all intents and purposes, completely impractical martial art of dueling with a two-handed longsword. Except: some secret society is hosting a clandestine, live-steel tournament where the best practitioners are invited to use their skills as they were truly intended – and being deadly weapons, well… you get the idea.

Refreshingly, Edelson’s use of violence is superbly tasteful, and consistently tempered by a healthy, human concern for life and subsequent guilt when harm is dealt. For a story about sword-fighting, this is remarkable, and very rare. And it is the sort of writing which expensive workshops the world over struggle to impart to their writers, many of whom have never seriously hurt anyone, let alone killed someone.

Meanwhile, he’s got the obligatory love story woven in, yet instead of being desultory and extraneous, it’s crucial, unique, and beautiful. In fact Edelson dusts off more than one classical trope to tell his story, and normally I would look to them to find fault, except that he executes each one with the élan of a longtime pro. Honestly, it’s a very well put together novel.

Edelson’s greatest accomplishment, in my mind, is his steadfast determination to tell a realistic story, while successfully maintaining interest.

Writing is a record of a series of choices, and at every turn there are infinite possibilities to explore – some more likely than others. Oftentimes writers are confronted with difficult decisions, such as when a crossroads presents itself where one direction is plausible but boring, and the other is far-fetched but much more exciting.

It is easier (and lazier) to try to amp up the tension by making outlandish decisions, but after a point your reader’s suspension of disbelief will fail to sustain them in the world you’ve created. It is far more challenging (and impressive) to stick to realistic choices, and to have your story stay engaging and surprising.

This is because, as a general rule, real life is boring. (That’s probably why we like stories in the first place.)

Turning up the scrutinization dial real high to find something to complain about, I found the use of money within the story to be a bit too convenient to explain certain things, but in the interest of avoiding spoilers I won’t go into detail. I will simply say that while Edelson has done fantastic work accomplishing some very difficult sells, a few of them he appeared to work less hard for. Also I think he could’ve come up with a much better title.

Perhaps the highest praise I can offer is that The Talhoffer Society reads like a Dan Brown book. I’m a slow reader (I read like I speak), and I nearly finished the book in just two sittings.