Everyday Inferno Theatre Company’s presentation of “Glassheart,” by Reina Hardy, directed by Anaïs Koivisto, is a thought-provoking reinvention of the classic fairy tale “Beauty and the Beast.” 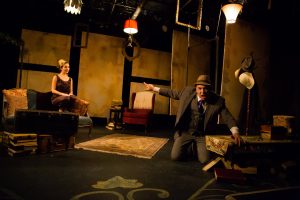 Our Beast, played by Christopher Alexey Diaz, is menacing both physically and emotionally. We meet him dressed in a fine suit, laying on the floor clutching a potted plant, while emitting an inhuman growl. We come to learn that he is the embodiment of a cruel juxtaposition: as freakishly well-read as he is antisocial, too cerebral for his own good. He can speak a dozen languages, yet cannot bare to exchange even simple pleasantries with a stranger.

Diaz transforms himself into a character that’s at once frighteningly monstrous, and also tenderly human, leaving the audience to decide which side of the fence to put him on (…or not). 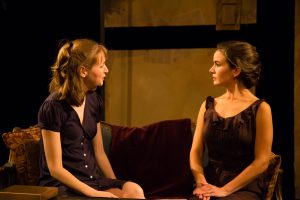 Meghann Garmany artfully portrays the role of a humble lamp: the sole remaining member of the Beasts’ famous league of anthropomorphic magical household items. (The rest of them, she says, left for high-end hotels in Europe.)

Garmany’s character does not have a name, a fact which she uses to support the notion that she is a non-entity. The play goes on to explore that issue, which we quickly find to be fraught with contradiction, in great depth.

And yet despite her jerky, android-like movements, and the cold, hard logic of her character…

Garmany manages to use those tools as a prism to distill for us a rare example of humanity that’s richer and more heartfelt than we, as real people in the audience, typically feel capable of, making Garmany’s performance truly inspiring to behold.

In fact, though Garmany is not the Beauty nor the Beast, she manages to steal the show from both of them in the pursuit of her own heroic arc: one guided by love, rebirth, and self-sacrifice. 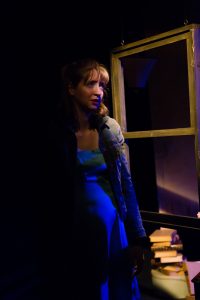 But it takes the plucky playfulness of Aoife, played by the enchanting Carey Cox, to set the play’s events unfolding. Cox is instantly lovable, and gives us an incredibly real, honest, and true-to-life performance – contrasting nicely against the other much stranger characters. And yet, paradoxically, Cox convinces us she is genuine by shamelessly flaunting how quirky she is. The laundry list of things that make her different are more pedestrian, that is to say not supernatural (she’s really into her cat, for example), and thereby we come to identify with her.

Hardy’s witty dialogue will keep your ears busy, but I recommend you watch the faces of the characters on stage – particularly the ones who are not speaking – to witness some truly great acting. The phrase “darting expression” cannot do justice to what these actors accomplish on stage. Some incredibly heavy sentiment, and some truly hilarious comedy, is conveyed in a split-second flit of an eye, or the twinge of the corner of a mouth. Some really impressive attention to physical detail has been taken in these scenes, and it’s part of the charm of an intimately small theater like The Access Theater that everyone gets a close-up look. 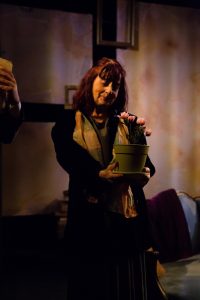 Audiences are also treated to a wonderfully creepy performance of Virginia Roncetti’s Witch, who created my favorite moment in the entire show when she sings a song near the end – and I’m afraid you’ll have to see it yourself to know why. In line with this production’s orientation toward detail, the Witch is the only person who knows where to place the potted plant in order to make it grow….

I get tingles just thinking back on it.

And while most of the themes in this show are very timely, one aspect that doesn’t quite translate is the plot device of abducting a damsel for the purpose of inducing a Stockholm Syndrome in order to get her to fall in love with her captor. There was only a single line of dialogue which even came close to dealing with how not cool that is, and then it was never again mentioned.

Glassheart is a play about weird people with problems, but in the exploration, we come to find that such weirdness lies at the heart of who we all are, and the further out we go from our perceived center, the closer we end up finding ourselves to the familiar, like a spectrum of color returning again upon itself – a cycle.