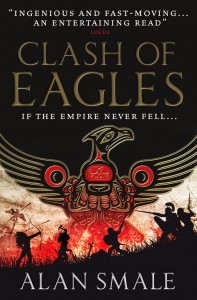 In a fictional universe wherein Rome never fell, an army of steel-clad legionaries sails across the Atlantic ocean in 1218, landing on the North American continent to seek out fabled golden riches. What they find instead is a “Clash of Eagles” – an inspiringly beautiful tale spun by master storyteller, Alan Smale.

While Smale is keen to deliver all the lovely details you’d expect from such an extraordinary setting, he does it in a surprising way. At first I was afraid it was going to devolve into a more primitive version of “Dances with Wolves,” but Smale is quick to defy expectations, and the story he weaves in this book is wholly unique and utterly compelling.

As you begin reading, you will marvel at his attention to detail – especially historical detail. You can hear the lorica segmentata jingling as the Romans march, and you can taste the sour-bitter tang of Cahokian corn beer as it’s drank during the midwinter feast. Sheepishly I admit, also, that this story, amongst its other aims, takes the premise of SPIKE TV’s “Deadliest Warrior” and runs away with it so far into the depths of historical accuracy it’ll make your head spin.

And as for what history cannot tell us, Smale’s imagination takes flight in tremendous fashion….

Smale’s writing is unremittingly character-driven, which is most often seen as an admirable quality in fiction. However, I tend to enjoy a little more visceral tactility than probably does the average reader, so I found the physicality of “Clash of Eagles” a bit underwritten. Every action he describes exists only in relation to a character and their experience, and while that is impressive to read, Smale has convinced me that sometimes a quick note describing which club has swung where might be the more effective storytelling choice. I suppose it depends.

Along those lines, one very cool map is included with the front matter, which depicts “Nova Hesperia” – what the fictional Romans call North America. Yet before the story was done I was wishing more maps had been included. The lay of the land plays a large part in the story (how could it not in a story about Native Americans?), and that sort of thing is hard to visualize with just words.

Remarkably, Smale’s exposition is the most thrilling I’ve ever read. Yes, that’s right: thrilling exposition. Smale’s expert use of language, paired with the sheer novelty of his material, and ultimately whetted by a genius order-of-discovery all combined to make me devour long sections of background information and thirst for more when I was done. These famously boring parts of most novels shine with gleaming awesomeness in this one. To Mr. Smale I say: well done, sir!

Ultimately, if you’re looking for an enchanting story set in a world that’s at once familiar and totally alien, and that’s equal parts ancient legend and heroic adventure, I can’t recommend “Clash of Eagles” enough.

It is the first book of the Hesperian Trilogy and I shall be waiting with baited breath for the next installments, coming out in 2016 and 2017.