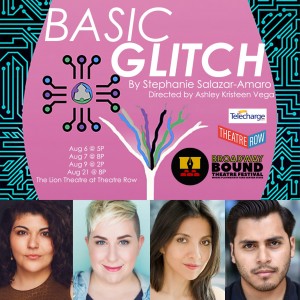 The story details the strange journey of Ramona, a woman with a dysfunctional reproductive system, as she seeks to repair her body the same way she would repair any other broken device: by taking a number at the Customer Service department.

In the unique and fascinating world of Salazar-Amaro, there exists an agency known as “the Center” which can help you fix problems with your own body like the Geek Squad can with your computer.

In the unique and fascinating world of Salazar-Amaro, there exists an agency known as “the Center” which can help you fix problems with your own body like the Geek Squad can with your computer.

The ensuing experience manages to be both bizarrely fantastical and strikingly familiar at the same time. To great ironic effect, Salazar-Amaro explores the deeply intimate nature of reproductive health through the starkly lifeless lens of modern-day corporate bureaucracy.

The plot starts off narrowly focused at the outset, before new elements get introduced and side-quests develop, diverging the show’s structure from a singular, unified story into something more like an amalgamation of stories.

Ramona is played by Cassi Torres, who shines as the lynchpin upon which the entire show turns. On Torres’s shoulders rest the majority of the dramatic weight, as her character faces the realities of a having a human body on one hand, and the social pressures of being a woman on the other.

Laura Kay is a comedic powerhouse. In the role of Magda, our plucky customer service representative, Kay fumbles and bumbles her way through trying to help Ramona, while clutching desperately to the only thing that truly matters to her: maintaining her antiquated filing system. Whether it’s her embodiment of a goofy neurosis, a well-timed facial reaction, or just some good ol’ slapstick – Kay is uniformly hilarious.

Patricia Perales breathes vivacious life into her role as Ramona’s aunt, Leanore, the big-hearted “Tía” who only wants what’s best for her family… and God help anyone who gets in her way!

Perales, along with her character, is bilingual, and a fine balance is struck between the flavor of a second language within the play, and basic intelligibility – one that I count as a credit to both the actor and the playwright.

But it’s Thomas Valdez who steals the show as Lino, the lowly, unpaid intern who’s so dedicated to his job that he will stop at nothing to deliver top-notch customer service to a client! …There’s just one problem: he’s not officially cleared to actually speak to any of them.

Valdez is effortlessly endearing, and brings an enthusiastic, boyish charm to the stage.

Valdez is effortlessly endearing, and brings an enthusiastic, boyish charm to the stage.

Salazar-Amaro invented a wonderful world for this show, and used it wisely to raise many worthy and thought-provoking questions. However some of her mysteries remained awfully mysterious for my curious tastes, particularly regarding the rules governing her world, and at times regarding the undisclosed agendas of characters.

Ashley Kristeen Vega makes quite the splash with her Off-Broadway directorial debut, helming a show that takes an honest (and sometimes uncomfortable) look at the more taboo aspects of womanhood. Teamed up with Salazar-Amaro’s script, “Basic Glitch” accomplishes this with grace, with humor, and with aplomb.

Catch “Basic Glitch” in the Lion Theatre at Theatre Row, August 7th, 9th, and 21st. Tickets can be found online, at the Broadway Bound Theatre Festival.