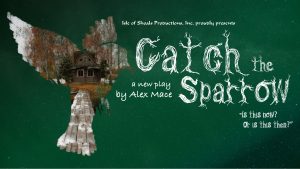 “Catch the Sparrow” tells the haunting story of a young man who goes back home to visit his estranged father upon receiving news that his father has been keeping a big secret – he’s dying of a terminal illness.

And that deception is just the starting point. Mace, who also directs the play, takes us on a journey that is alternatingly harrowing, hopeful, shocking, and insightful. The grotesquely malformed relationships he’s woven between his characters are like a car accident you can’t look away from. And yet each personality is securely anchored to the truth of their own humanity, making “Catch the Sparrow” a vividly personal story, and a tense, gripping play.

William Schineller plays the dying father, and he’s got such commanding gravitas, it’s as though he can conjure up post-traumatic stresses within you on the spot, somehow reminding you of an impending threat you never knew you already knew about. With impressive grace and measure, Schineller shows us a man who has given up on everything, yet is fighting like hell to get it back – a walking contradiction.

Also, his booming basso voice can roar like thunder.

Fowler gives us the disturbingly accurate portrayal of a tortured young man, wracked by his own past, and torn apart by the crossroads where his future diverges from his present.

Melissa Eddy Quilty, Meredith M. Sweeney, and Tyler Joseph each add a supportive component to the story. Quilty, who’s performance will give me nightmares, and Sweeney, who is as secretly strong as she is openly sweet, act as foils for the two anti-heroes, father and son.

The show itself has excellent pacing and effective plot twists, but with so much going on at once, I found some of the characters’ motivations a bit mysterious at times.

The play digs down deep, and it gets dark there. But Mace’s clear vision drives every choice with artistic calculation and discrimination, delivering a superbly well-wrought piece of theater with something to say, something to feel, and something to give.

Tweet
No tags Comments Off on Review: “Catch the Sparrow” by Alex Mace more...